Tottenham came from a goal down to claim a dramatic victory that saw them win UEFA Champions League Group D, while Marseille were knocked out of European football for this season. Spurs were subdued and second best to a pumped-up Marseille side in the first half, the visitors watched from the stands by manager Antonio Conte after he was sent off on matchday five.

Hugo Lloris made good saves to deny Alexis Sanchez and Jordan Veretout, but Marseille took the lead late in the first half through Chancel Mbemba’s powerful header. But Spurs looked a transformed side after the break and were level when defender Clement Lenglet headed in from a free-kick. Pierre-Emile Hojbjerg hit the crossbar with 10 minutes left, and then with Marseille desperate for a winner, Hojbjerg broke away to clinch the game with an unstoppable shot.

Conte cut a subdued figure having been forced to watch from the stands at the Stade Velodrome, but there was, eventually, plenty of reason for him to be upbeat following another gritty performance. Tottenham were forced to do things the hard way, and indeed for long periods they looked well below their usual standards, with talisman Harry Kane taking fully 51 minutes to find his first proper sight of goal. 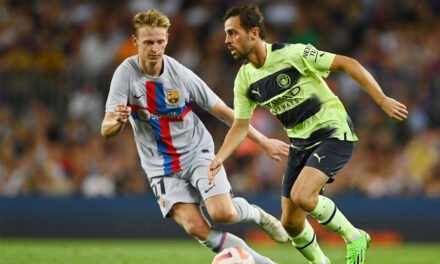